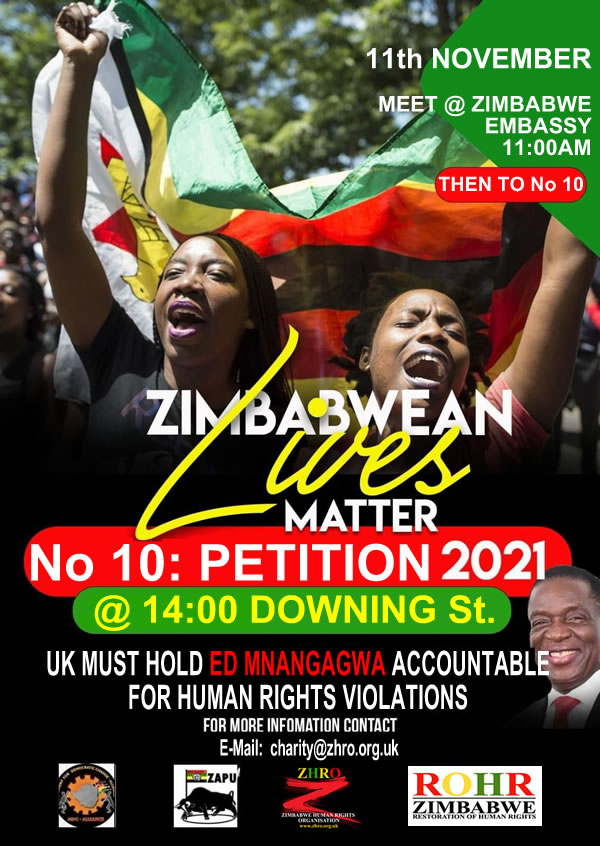 This article is published at 14:15 today [11th November 2021] AFTER the Petition Hand-Over to Boris Johnson and Co at 10 Downing Street, Whitehall, London. SW1A 2AA. This will appear automatically to allow the public to see the body of our petition for themselves. We feel it is a matter for public debate, that the Regime who have taken over in Zimbabwe needs to be exposed due to corruption, mismanagment and gross human rights abuses.

After 14:15 on the 11th November 2021 link  to view the Petition itself - as it should be for the general public to see. NOW AVAILABLE - CLICK HERE

Thereafter we may walk to the FCDO Offices to shout about why their faith in Zanu PF and Emmerson D Mnangagwa, and the Zanu PF 'cabal' is entirely misplaced!

Order of the Day

We had congregated outside the Zimbabwe Embassy located at 429 The Strand, London WC2R 0JS from 11:00am onwards - or whatever time people arrived from all over the UK - those from Newcastle or Scotland, have got our sympathies for the length of journey. To keep costs down it is invariably by coach! Often leaving at midnight or the 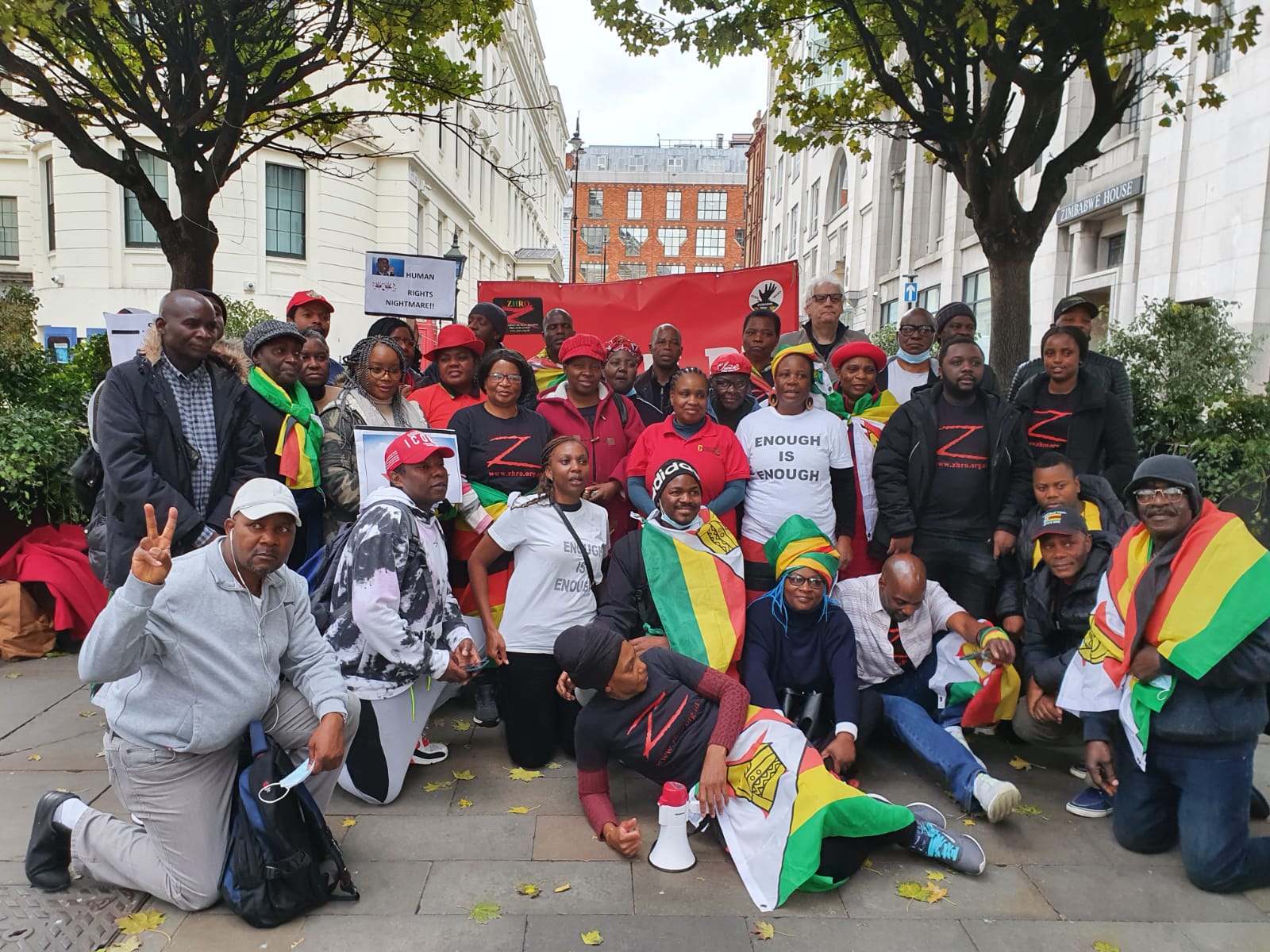 'early' hours. Moses Mbano has done this trip several times! From Newcastle today, we met with John, George and Margret.

With us today were Sheperd Yuda, Chief Ndiweni and many other free thinking Zimbabweans, and other supporters of justice and freedom!

By 13:30 [1:30pm] we  moved off from the Embassy, via Trafalgar Square, to first Whitehall, then we congregated opposite the entrance to 10 Downing Street. We sang, danced and played the drum whilst we awaited the 14:00 timeslot to enter the security corden around 10 Downing St. Each of the six Zimbabwean petitioners, Sipilien Birani, Malvern Dengu, Shamiso Moyo, Tryness Ncube, Model Pamire and Zakhele Maphosa, had been vetted by the Diplomatic Police Unit up to 10 days prior to entry. They had photo-ID with them to support that vetting process. On our Flickr Album Page you can see their progress, and of the rest of the day as a photo-log plus a few videos too! 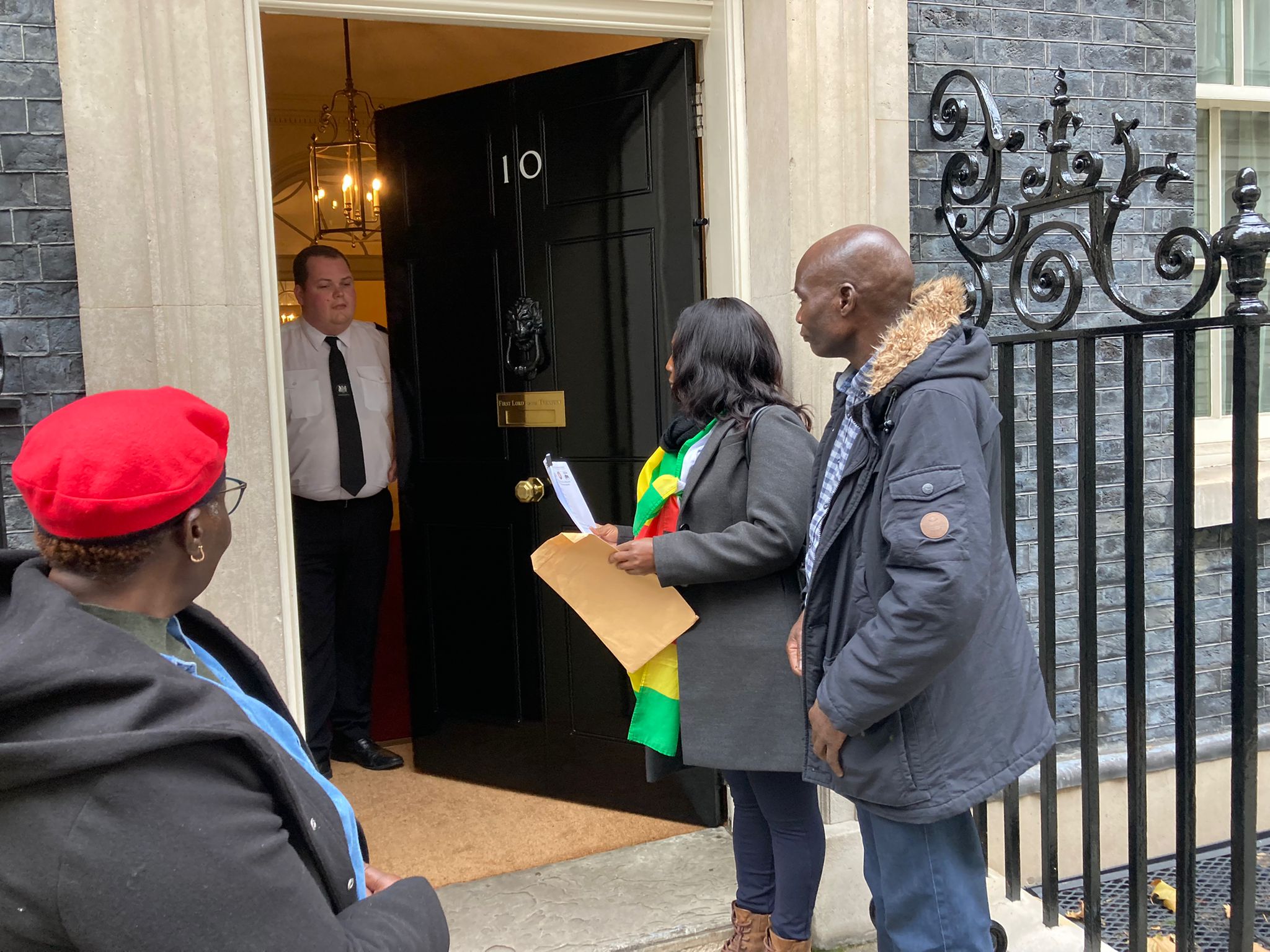 Once beyond the gate to Downing Street the petitioners were at liberty [and we encoraged them to do so] -  to take photographs of themselves as a group and individually. Several of the photos at the door to Number 10, were actually taken by one of the Policemen there! As Yuda, proclaimed to his listeners - come to the UK as the Police here treat you so well!

After they returned to the main group situated opposite the entrance to Downing Street, the petitioners were greeted with cheers and more music! ...and dancing! see video on our Flickr page above!

It was at that stage that this pre-arranged article with its link to the PDF Petition document became publicly available arounf 14:15. Please read, consider and circulate.